Taking the story in the 80s, X-Men Apocalypse tells the story before the original trilogy and more precisely after the X-Men story The First Class (2011). The story might be a little confusing because all the X-Men stories we know change suddenly. Relax, this all happened because Wolverine reset all of them while on X-Men Days of Future Past. 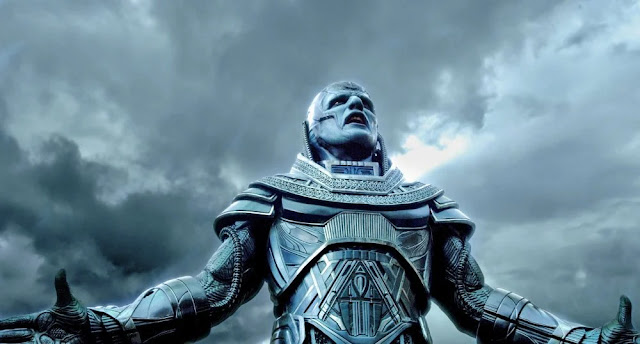 You will feel the aura of Katniss Everdeen in Jennifer Lawrence as Mystique. The young mutants who were amazed by his reaction against Magneto in front of the President of the United States in the X-Men film The First Class (2011). Mystique who acts alone saves Nightcrawler (Kodi Smit-McPhee) and takes him to Xavier's school, and gets news about the rise of the Apocalypse, which plans to destroy civilization.

Magneto (Michael Fassbender) lives in Poland, trying to make a small family with his wife and children, but it doesn't last long when he has to accept the bitter reality of his son and wife being killed. Magneto who was hurt and angry with humans was an easy target for Apocalypse to be recruited as The Four Horsemen. Other members are Storm (Alexandra Shipp), Psylocke (Olivia Munn), and Angel / Archangel (Ben Hardy). Here is also told the story of Storm who is a street child in Egypt and saved by Apocalypse.

Although not getting a lot of dialogue, Olivia Munn looks beautiful (and at a glance like an Indonesian artist, Hannah Al Rasyid) with her sexy costumes as Psylocke. Plus Ben Hardy looks cool with metal wings. X-Men Apocalypse offers more exciting battles than the previous superhero films.

Not to be outdone by the humor in the film Captain America: Civil War, Bryan Singer instilled humor in Professor X, and what was most felt was the figure of Quicksilver (Evan Peters), once again Quicksilver gave a distinctive joke, even when facing Apocalypse. X-Men Apocalypse also tells that he is a child of Magneto. So here we are confused, actually, Magneto has been in touch with anyone? then where is the figure of Scarlett Witch?

The old enemy Stryker (Josh Helman) was present, and the most awaited was a cameo from Hugh Jackman as Wolverine. When all mutant characters were replaced with younger actors such as Tye Sheridan, Sophie Turner, and Alexandra Shipp, Bryan continued to use Hugh Jackman when Wolverine was made Weapon X by Stryker. Hugh Jackman is irreplaceable.

X-Men Apocalypse became the X-Men film with the coolest battles of the previous X-Men films. For those of you who are not big fans of X-Men can still enjoy this film, because it will be entertained with cool CGI effects.