By Admin HB 06 Jun, 2020 Post a Comment
Movie Reviews: The Transporter (2002) - This film tells the story of the journey of Frank Martin (Jason Statham) as a courier. Not an ordinary courier, Martin has the duty to move mysterious items - even humans - from one place to another. Martin won't ask much about what he will bring. 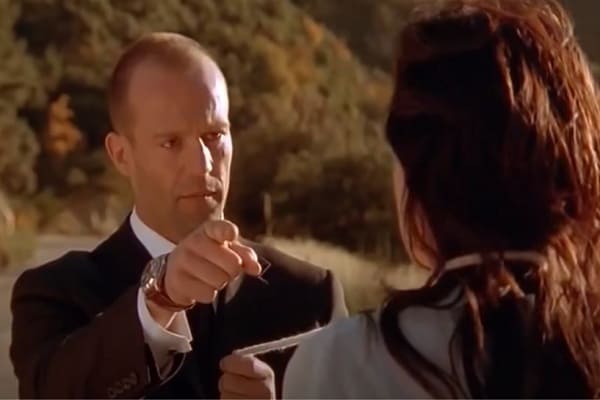 The Transporter film has been released since 2002. The Transporter or the title in its French language, Le Transporteur is an action film from France. The film was directed by Louis Leterrier and Corey Yuen. The story of this film was written by Luc Besson and stars Jason Statham.

Frank Martin is a very skilled driver known as "The Transporter." He will transport anything, without question, always on time.

Frank is the best driver in the business. He strictly follows three rules when transporting: Never change the agreement, No name, and Never open the package. In Nice, Frank was hired to transport three bank robbers in his black BMW 735i. But they lifted the fourth person in his car after the robbery.

Explaining the additional weight will affect well-planned holidays. He refused to drive until, the despair of the robbers. The leader killed one of his men who had been pushed out of the car. Then they offered Frank more money to take them to Avignon. Frank refused. Robbers fled in another car but were foiled by their amateur driving.

At Frank's villa in the Mediterranean, local Police Inspector Tarconi questions Frank. Inspector Tarconi about a black BMW who escaped from the robbery. Frank was then hired to send a 50-kilogram package to an American, Darren "Wall Street" Bettencourt. The item was loaded into Frank's luggage.

When replacing a flat tire, Frank noticed that the package was moving. Realizing someone was inside, he violated Regulation No. 3 to give the person a drink. He found a woman, who was tied and also blocked with tape in her mouth. He tries to escape but Frank catches him back. Frank returned it to the trunk along with two policemen who saw them. Frank sent the package to Bettencourt as promised and agreed to carry a briefcase for him.

Frank stopped to buy soda for the police in his suitcase, but they were killed by a bomb hidden in a suitcase. Because of revenge, Frank returned to Bettencourt's villa, where he killed and injured several Bettencourt accomplices. Frank then steals the car to leave, only to find the "package" bound and scattered in the back seat.

He brought the young woman, named Lai, back to her home. Bettencourt visited one of the men who were still alive in the hospital to determine who had attacked his residence. Before killing the man after learning that Frank is still alive. The next day, Tarconi came and asked about Frank's car, which according to Frank was stolen.

Lai said that he was Frank's new chef who was also his girlfriend, to support Frank's alibi. Tarconi returned without proof, not long after that, Bettencourt's minion rain missiles rolled into Frank's house. Frank and Lai fled, using diving equipment, to the nearest hiding house. The house was prepared by Frank for unexpected things.

Frank was annoyed with all the chaos, but Lai overcame it by seducing him. When interrogated at the police station, Lai accessed Tarconi's computer to find information about Bettencourt. Lai tells Frank that Bettencourt is a human smuggler. 400 Chinese, including his family, are trapped in shipping containers.

Tarconi told Frank to be arrested and locked up at the station. How can Frank free the captives? What would Frank do to be free from Tarconi?

Louis Leterrier was assisted by Corey Yuen in directing this film. Louis Leterrier is also famous for his other works, namely the film The Incredible Hulk (2008) and The Clash of Titans (2010).

This film produced by Fox Studios first appeared in theaters on October 11, 2002, and entered the list of box office categories. Reported by the Mojo Box Office site, the film The Transporter (2002) made a profit of USD43 million worldwide.