By Admin HB 06 Jun, 2020 Post a Comment
Movie Reviews: Review and Synopsis LOGAN (2017) - The Dramatic Superhero Story - The plot of the X-Men and Origin Wolverine franchise might be a little confusing. Especially because the time setting has a back and forth flow. For Wolverine's solo movie, for me, it has never been very memorable, except after the latest installation at the same time, this time, namely Logan. This movie really became a climax and made the audience stunned, amazed, and even ended in emotion.

The movie takes a background in 2029, with Logan looking much older and poor. The condition of the old mutants was also similar to the normal human condition when aging. Painful and passionate. Even worse because Logan spends his time getting drunk, while he is still caring for the elderly professor Xavier. His ability to recover is also not as great as before, which also raises questions in the minds of the audience. Because he said Logan was infected by a virus. 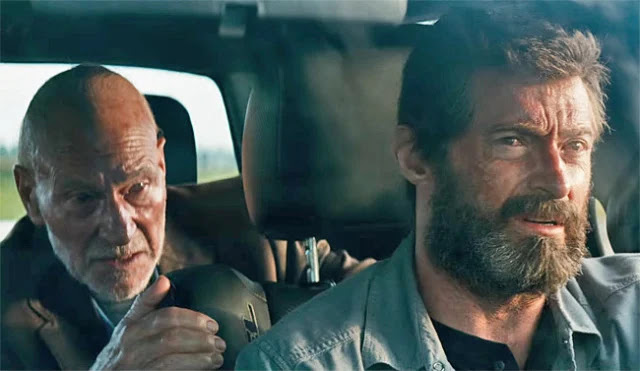 Having previously told the movie X-Men Apocalypse, the Transigen project undertaken by the Essex company to present new mutants as deadly weapons. Now the chaos has finally emerged and haunted Logan's life again. A child named Laura appears, who has the same ability as Logan, which is removing adamantium claws. And of course, the Transigen project team had to hunt down mutants because it was still called their 'failed product'.

The Logan or Wolverine battle is now far more violent than all the movies it appeared. These claws with adamantium material are shown more in tearing their opponent's ‘flesh’. In fact, you could say, this is the most sadistic superhero-themed movie we have ever watched. I am a bit doubtful whether this movie can be enjoyed by all viewers because the fight scene is too gory.

But director James Mangold is good at playing the emotions of the audience. He brings a lot of dramatization from scenes that invite anger, how the abomination of the mutant hunters treat the mutants like animals. So, the audience can join in feeling Wolverine's anger by blindly beating enemies without mercy when fighting. Maybe this could be the reason why scenes covered in blood can still be comfortably witnessed by some viewers.

Although on the other hand, it is somewhat controversial because the actor Laura Kinney (X23) himself is still very young namely 11 years old, must play an action that is arguably more appropriate to be played by adults or at least teenage characters. But in acting, there is nothing less than Dafne Keen's role when dealing with cameras. This young talent is also quite flexible in dialogues in Latin and English, and even for extreme actions.

In this Movie, the audience also increasingly feels the closeness between Prof. Xavier and Wolverine-like a father and son. Indeed, more or less 17 years ago, actors Hugh Jackman and Patrick Stewart played the two central figures in the X-Men franchise, but this time the two seemed to be more closely interacting and full of drama.

The Logan movie might also successfully change the audience's stigma of a superhero from what we have witnessed before where the conflict comes, then the superhero sets the war strategy and wins. In this movie, viewers will feel a long, hopeless adventure without a clear end.

Logan's long story is displayed for 2 hours and 17 minutes, usually, you will only get it in Oscar-nominated movies. Or maybe this movie has indeed been further evolved to show something completely different. Not only the brutal and dark impression of the battle that was presented but the plot of the story that was displayed very dramatically managed to touch the sympathy of the audience. For myself when watching the movie Logan, maybe this became like an X-Men franchise mixed with the concept of the movie Mad Max, Old Boy, until, Terminator.

Different from the superhero movies that currently exist, both from DC and Marvel, when you watch the Logan movie, it is no longer watching a superhero movie. This Movie is not just exciting or impressed fun with magnificent visualization effects, even far from the concept of stunning costumes.

For those of you who have not witnessed some of the sequels to the X-Men and Origin Wolverine franchises before, it really isn't that much of a problem. Because the action of the action that is very adrenaline is already quite riveting. You can still enjoy this one Movie as a separate story. But surely you will know more about the ins and outs of the mutants and the background of each story if you have watched the entire sequel to the X-Men Movie.