By Admin HB 06 Jun, 2020 Post a Comment
Black Panther Detective Film: Movie Reviews 21 Bridges: Chadwick Boseman returns to action against criminals, this time he does not wear his Black Panther costume but instead uses a firearm as an NYPD detective. Well, in this story there is a question, namely What if your job turned out not what you expected. In this 21 Bridges movie review, you will get information about it. 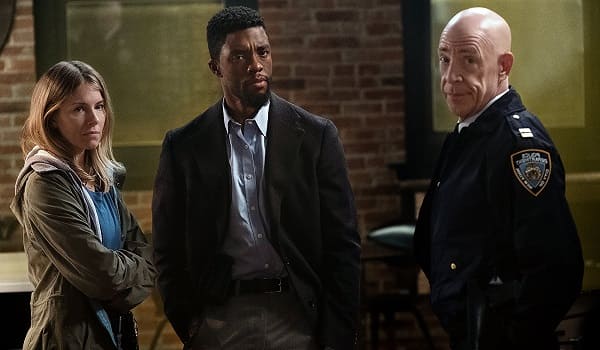 The father is a figure who is generally used as a role model by his child, - until finally, the child is idolizing the father, to the profile of his work. This happened to Andrew Davis (Chadwick Boseman), who had to give up his father's death, one of the police officers who died at the hands of a drug addict.

Since then, little Drew aspires to continue in his father's footsteps, combating drug trafficking in Manhattan. Until finally he sat in a strategic police position.

But Drew's career path was filled with bad reports which he was sentenced to be too light-handed. Yep, Drew did not hesitate to finish off the drug traffickers, who had been hunted since the beginning.

But apparently, the provos warning had a veiled intention, which made Drew increasingly suspicious. Until a case of robbery of pure cocaine in a very large number by two (2) former military men, became the starting point for the opening of drug syndicates that have been working in Manhattan.

In the synopsis of the film 21 Bridges, Boseman plays the role of a detective named Andre Davis, who is known for easily opening fire on criminals, in total he has shot about 8 people while serving as officers and 4 as the detective.

Davis and Frankie Burns were assigned to handle 50-55 kg of cocaine robbery in a wine shop. The cocaine was stolen by criminals named Michael (Stephen James) and Ray (Taylor Kitsch) after a shootout that killed many police officers and a store employee.

"We got 21 bridges in and out of Manhattan. Shut them down. 3 Rivers, Close them. 4 tunnels, block them. Stop every train and loop the busways. Then, we flood the islands with blue."

That's the sentence delivered by Davis to lock up the criminals on the island of Manhattan.

At that point, we think the film 21 Bridges is only a detective who hunts criminals, but the director, Brian Kirk, brings up another story plot that makes this film quite interesting.

Detective Davis had a strange time handling the case, starting from the 8 police who caught the robbery of the cocaine, the shooting of a witness until he was given a pair of flash drives from Michael which reinforced Davis's suspicion so far that the police enjoyed the benefits of the existence of the cocaine.

Towards the end of the story, the audience was surprised by Frankie Burns shooting Michael who was actually persuaded by Davis and could be a witness to the conspiracy of the corrupt police officers.

Although it has an unexpected plot, the final results for corrupt police problems are less satisfying. The audience was not told how Davis uploaded the corrupt police list to the internet and also about the other police involved in the dirty practice.

Was it processed by law or were all corrupt police officers killed during the pursuit of the criminals? Because what was highlighted was only Frankie Burn who was captured, the rest like Captain McKenna and 3 other policemen were killed by Davis.

Overall, the film 21 Bridges is interesting from the side of the story because it does not only highlight the arrest of criminals, so 1 hour 39 minutes spent watching the film becomes not felt. For fans of action films with shootout scenes, it is suitable to watch 21 Bridges because they have quite exciting and tense shooting scenes.

Aside from Drew who grew up in a police family, several other main characters didn't get much of their past. Starting from how the story Michael (Stephan James) and Ray (Taylor Kitsch) who is a military veteran turned into a bounty hunter, agent Frankie Burns (Sienna Miller) who became Drew's colleague Drew from the Narcotics division to police captain McKanne (JK Simmons) the Police chief.

In my opinion, besides selling a very interesting storyline, this film places the greatest burden on the shoulders of Boseman (Black Panther, Avenger, and 42) as the main protagonist.

The brilliant performance was presented by Stephan James, who succeeded in visualizing the psychology of someone who was actually good-hearted, but who was forced to commit criminal acts.

Unfortunately, the main actress Sienna Miller seems to be less than compensating for Boseman in some action scenes. Like how to hold a gun, also the watchful expression that should be the hallmark of a police officer.

The Manhattan landscape at night which is used as the background of this film is presented quite well by the director, Brian Kirk. Likewise the use of public areas such as subway stations, and Chinatown areas during chase scenes between Drew and Michael.

Audio, in my opinion, there is nothing special. Most commonly heard only the explosion of firearms and the roar of car engines when chasing scenes. In contrast to the selection of background songs that are very touching, especially at the beginning of the film where Drew's father was given the last respect, and at the end of the film when Drew walked out of the scene.

The story of the film 21 Bridges is indeed making Manhattan as a setting. But it is not impossible, happening also around us. There are many special messages that are deeply conveyed by this film, especially for law enforcers around the world.

Even though there are parts of the film story that I think makes no sense. The most I remember, related to Drew's ignorance, about things that were massively organized, around his work environment. In fact, he targeted drug cases.

Well, for those of you who have read this Synopsis 21 Bridges film, try watching the trailer on our Facebook fan page WOW.

Maybe after this will make you more curious about how the story really is.