By Admin AA 04 Jun, 2020 Post a Comment
Movie Reviews KING KONG (2005) 'Love Story of the Beauty & the Beast - This film tells the story of a young actress who almost slumped his career, named Ann (Naomi Watts). He lives in New York City. At that time in the 1930s, the United States was hit by a very severe economic depression. Almost all business sectors were totally paralyzed, including the film industry. 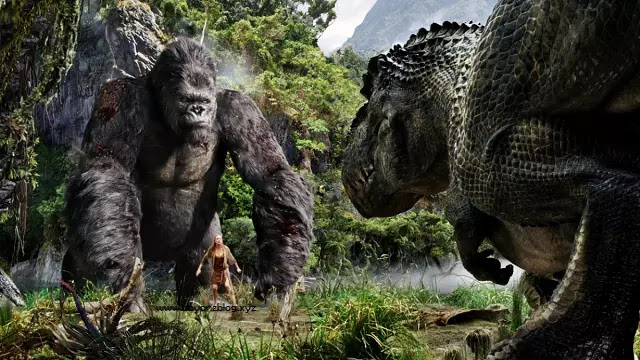 As a result, many famous actors and actresses have fallen into poverty, because there are no more offers to play films because many film industries are bankrupt. But Ann's fate suddenly changes, when he meets a director named Carl Denham (Jack Black) who offers him acting for an ambitious film project.

Feeling lucky, Ann did not waste the golden opportunity. He immediately agreed to join the film project, although his heart was still in doubt. Because Denham is very secret where they will do the shoot.

Not only Ann actually felt suspicious about Denham, but all the film crew including the producers also disagreed with the director's crazy ideas. Finally, he was forced to run his film project secretly. In fact, he even had to "kidnap" a young playwright named Jack Driscoll (Adrien Brody), to help work on the scenario of his film project this time.

Long story short, finally Denham then designed an expedition trip to the South Pacific region, precisely to a place that has not been touched by civilization, called Skull Island. That place is believed by people only exists in myth. But not for Denham. He was very confident that he could find the mysterious island and work on a large project there.

An expedition ship was chartered with the leadership of Captain Englehorn (Thomas Kretschmann), assisted by some formidable cabin crew, Preston (Colin Hanks), Jimmy (Jamie Bell) and Hayes (Evan Parke). But the crew actually panicked because in addition to the purpose of their expedition increasingly unclear, began to appear also terrible monsters who are ready to prey on them alive.

Finally, terror in the oceans stopped. When a thick fog obstructs the view, the hull suddenly hits a ground-level until a violent impact occurs. Apparently, they managed to reach Skull Island. Denham's heart was very excited because his ambitions so far were almost fully achieved.

However, the exoticism of the island was apparently not enough to fulfill Denham's desire to capture it through film. Later, he finally learned that in Skull Island there are also ancient natural habitats. I was so naive, it was not realized there was a great danger ready to threaten the lives of the entire crew at any time.

He was finally terrorized by a herd of primitive tribes who had lived in that place for a long time. Even the actress, Ann, was kidnapped to be an offering to a wild animal which they consider to be the ruling god on the island. Who else if not King Kong.

But strangely, for some reason, King Kong was actually even attracted to Ann's beauty. Instead of being made a meal, he also prefers Ann to be cared for and nurtured. Seeing the softness of Kong's attitude, apparently, Ann felt there was a gap to be able to continue to survive. He also treats Kong with full attention and affection, like treating a human.

Basic actress, the play produced results. Kong became captivated and fell in love with Ann, not only because of her beauty but also because of her attitude that was different from humans who had been "victims" of her. He suddenly felt like he was being watched and his confidence began to grow.

Just like in love, Kong was willing to sacrifice anything in order to look after Ann. Until he was willing to fight tooth and nail with a fierce T-Rex flock. Ann slowly began to realize, that this Kong actually has a compassionate character. His brutal attitude so far has apparently only been driven by loneliness, because he lives in an isolated place without even a friend accompanying him.

On the other hand, this incident greatly benefited Denham. He immediately planned a rescue mission, to make a documentary that was splashy and sold. Not only that but he also ambitious to bring Kong to New York as proof that his discovery was really real. That way, he can become famous and rich suddenly. How cunning.

With great sacrifice, Denham's ambitions were achieved successfully. He also managed to conquer Kong and took him to New York. As a result, King Kong was furious. Feeling he was treated inhumanely, he finally rebelled and tried to escape back to his original habitat.

The story continues, he devastated the whole city in order to find Ann and bring her to Skull Island. Panic broke out everywhere until World War I air force was mobilized to stop Kong's action. Confused and depressed, Kong climbs the Empire State Building (the tallest building in the world) while carrying Ann in the palm of his hand.

Ann with the gentleness of his attitude tried to calm Kong's, troubled heart. Finally, Kong realized and began to soften. However, it was too late because he was now the target of topnotch hunts throughout America. This is the most dramatic atmosphere that occurred between Kong and Ann at the end of this film's story.

You will see, that KING KONG is actually a very touching love story. Of course, Peter Jackson not only wants to highlight the mere issue of romance but also the power of love universally. Love that is able to move the hearts of every human being, to sacrifice for the harmony of life in this mortal world.

By continuing to present an original story, Peter was able to present something completely new to the midst of film-lovers throughout the world. Will the latest version of KING KONG be able to repeat the success of its predecessor's creations?