By Admin HB 26 Apr, 2020 Post a Comment
Movie Reviews: Review and synopsis of the film Jumanji Welcome to The Jungle (2017) - Remember the Jumanji game that gave rise to many animals and hunters? At the end of 2017, Sony Pictures brought a sequel to Jumanji (1995). Entitled Jumanji: Welcome to the Jungle, this film was produced by Jake Kasdan and starring Dwayne Johnson, Jack Black, Kevin Hart, Karen Gilan, and Nick Jonas.

The story begins in 1996 when a teenage boy discovers the Jumanji board. Arriving at home, he was not interested in playing it and was busy playing video game consoles. In the evening, Jumanji miraculously turns into a console cassette. When he played it, the teenager was sucked into the game. 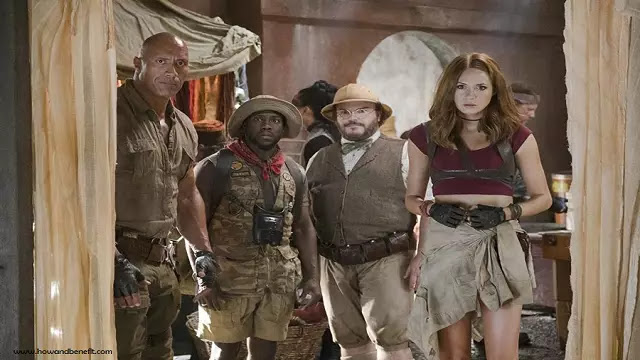 Then to the present, four high school kids from Spencer (Alex Wolff), nerd, Fridge (Ser' Darius Blain), Spencer's former football friend, Bethany (Madison Iseman), popular beautiful girl who likes selfies, and Martha, (Morgan Turner ) shy and critical girl. They met because they were sentenced to clean the school basement. Spencer also found an old video game console called "Jumanji", he invited others to play and was sucked into the game.

Inevitably they must follow the game to get out of Jumanji. Their mission is to return the gemstone to the Jaguar statue that was taken by John Van Pelt with various obstacles and adventures. Did they return to the real world?

Jumanji Welcome to the Jungle tries to mix up a classic game to be more contemporary by making it a video game with avatars to choose from. Without the need to watch the first film, it seems we can follow the storyline. Jake Kasdan modernized Jumanji with a solid cast. Although The Rock, aka Dwayne Johnson, appeared tall, brave, and brave, he had to play the part of Spencer's timid soul and a bookworm.

Kevin Hart also had to play Fridge who in the real world was tall and hero, but in Jumanji, he carried a backpack and a short bag. Karen Gillan must play the role of badass girl Ruby Roundhouse even though her soul is shy and awkward. Finally, there was Jack Black, the voice actor Po’ on Kung Fu Panda, who managed to steal the show with his role as Bethany in the avatar of Professor Sheldon, a fat middle-aged man.

Jack Black's sophistication as Bethany managed to invite laughter. The feud of Kevin Hart and The Rock also entertained like a high school student, before they had had a clash acting in Central Intelligence. Some dangerous scenes passed by The Rock, though in his heart Spencer screamed in fear.

Not only full of unexpected adventures, the various obstacles they face together foster a sense of familiarity with the characters. The meeting of the four of them was similar to the film The Breakfast Club. Not forgetting his original film, Jake slipped the memories of Alan Parrish, played by Robin Williams and the sound of drum Jumanji.

This film also supported the appearance of Nick Jonas and Bobby Cannavale. Although he doesn't get much dialogue, Nick completes the story with his good looks. While Bobby appeared violent and gothic as a hunter for John Van Pelt. In the film Jumanji (1995), the figure of Van Pelt is played by Jonathan Hyde.

Jumanji Welcome to the Jungle at least succeeded in re-concocting classic works with contemporary spices and good casts.