By Admin AA 17 Jul, 2019 Post a Comment
Tomato content and health benefits that you will get from consuming tomatoes - Did you know that tomatoes were once considered poisons? True, tomatoes are members of the nightshade family and, at one time, were considered poisonous.

Tomatoes were first eaten in the US in the early 1800s when Robert Johnson surprised his hometown by eating a basket of tomatoes in the middle of the city. They become part of American food when he doesn't die or even gets sick because of tomatoes. 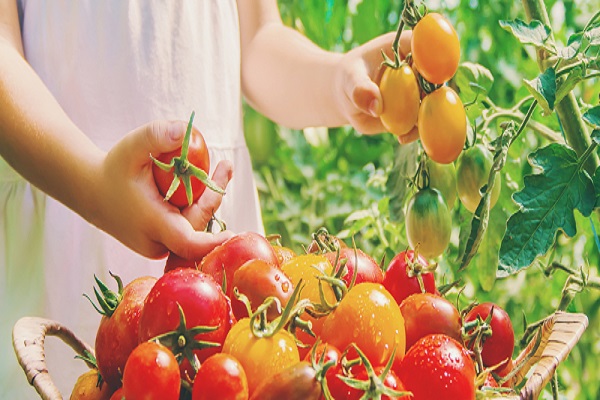 We now know that tomatoes are not toxic, and they are pretty nutritious. First of all, tomatoes contain lots of vitamin C, which is quite helpful, as you might have heard. Vitamin C helps the body produce collagen, the skin of essential proteins, scar tissue, tendons, ligaments, and blood vessels. Vitamin C is also an antioxidant that helps prevent cell damage by free radicals.

The content of lycopene in Tomatoes can prevent cancer

Tomatoes also contain potent antioxidants called lycopene. Research has shown that men who consume 10 servings of tomatoes a week reduce the risk of prostate cancer by 45%. Lycopene also reduces the risk of colorectal and gastric cancer and inhibits the growth of other types of cancer cells. Lycopene can also help parents stay active.

The Tomato also contains Chlorogenic Acid and also Coumaric Acid. These compounds are thought to inhibit the effects of nitrosamines, which form naturally in the body but are also potent carcinogens in tobacco smoke.

Tomatoes can also help reduce the risk of heart disease. Tomatoes are a good source of potassium, niacin, vitamin B6, and folate. Niacin has been used for years to reduce cholesterol. Potassium has been shown to reduce high blood pressure. And vitamin B6 and folate are used by the body to convert dangerous chemicals called homocysteine into more benign compounds.

When you buy tomatoes, be sure to buy bright red ones. This shows a high amount of beta-carotene and lycopene. Lycopene is found in the cell walls of tomatoes, so by cooking it in a bit of oil, more lycopene is released ultimately.

Also, cooking tomatoes in a little olive oil helps your body absorb lycopene. If all you find is canned tomatoes, it's okay. Cooking and canning do not cause tomatoes to lose their nutritional value. So what are you waiting for? The tomatoes cooked are as effective as fresh tomatoes.

So tomatoes, once considered deadly poisons, are now a nutritious staple. They help fight cancer and contain reasonable amounts of vitamin C and other vitamins and minerals. So start adding tomatoes to your daily diet.

If the ingredients used are ground beef, cook the ground beef in the pan until it turns brownish. Drain the meat, and add to the pan.

Remove the sauce from the fire, and serve over the pasta. The leftover sauce will freeze well.