Learn About the Awesome Health Benefits of Milk Thistle Silymarin

By Admin HB 26 Jun, 2019 Post a Comment
Learn About the Awesome Health Benefits of Milk Thistle Silymarin - Milk thistle silymarin has been used since ancient Roman times for many health benefits because of the anti-inflammatory and antioxidant properties it contains. Actually, silymarin is the active ingredient in the herb, milk thistle. Most recently, it has been used as treatments for boosting the immune system to fight off illness, gallstones, and skin cancer. Because of the antioxidants, it is an anti-aging remedy, as well. 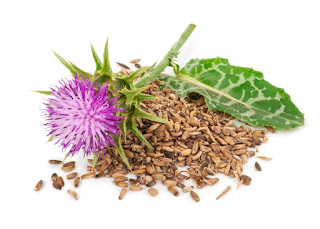 There are many uses for this natural plant ingredient as the knowledge of antioxidants becomes better known. It is being sold as dietary supplements where 80% silymarin is considered the standardized content desired for effects.

As a plant, most Americans consider milk thistle an undesirable, prickly weed, which contains a milky sap with purple flowers.

The seeds of the milk thistle are what is believed to be the medicinal part of the plant, and the extract of the seeds has been used for treating chronic liver disease, type II diabetes and hepatitis C. Milk thistle extract contains 65-80% silymarin, typically.

Studies have been done on workers who were exposed to toxic chemicals over a long period of time. When given the standardized 80% milk thistle silymarin, they showed significant liver function improvements.

Because it is highly effective as an antioxidant and known to protect new liver cell growth, its use for liver diseases such as liver degeneration and hepatitis, are not surprising.

Besides these purposes, it has also been shown to lower cholesterol levels, reduce insulin resistance in people that have diabetes along with cirrhosis, reduce the growth of cancer cells and even reduce the effects of a hangover.

There are some side effects, but they are usually mild and can include upset stomach and diarrhea when ingested and skin rash when coming in contact with the plant.

Other warnings about milk thistle silymarin include the interaction with certain other medications, such as allergy medicines and other medications that are broken down by the same liver enzymes.

It should also not be taken by pregnant women or people with a history of hormone-related cancers.

Recommended adult dosages of milk thistle silymarin are 200-400 mg, one to three times a day or silymarin-phosphatidylcholine complex, taken 100-200 mg, two times per day. Of course, if you suspect you have liver disease, you should see a physician, since it can be life-threatening.

Silymarin is a group of flavonoids that protect new liver cells from being destroyed while repairing damaged liver cells. It comes in capsules, liquid extract, tincture, and complex forms.

The complex is believed to be absorbed easier than the other forms because it attaches to the cell membranes easier and offers quicker protection. Of course, because of its known benefits, any form should be considered therapeutic.

The amazing qualities of the obnoxious weed are hard to believe when you consider it is a landscaper's nightmare because it matures in less than a year and spreads itself everywhere.

The birds love the thistle seed, and it is possible they know the benefits of milk thistle silymarin that we have yet to discover. From what we know, there are some miraculous properties associated with the plant.