Health Benefits of Tea - How TheseEffects Vary Between Different Types of Tea - Discussion of the health benefits and health effects of tea has flooded the internet as well as print publications in recent years. Commonly mentioned health benefits include antioxidant activity, cancer prevention, lowering of cholesterol, lowering of blood pressure, reduction of stress, antibacterial and antimicrobial activity, and enhancing general health and promoting overall well-being. 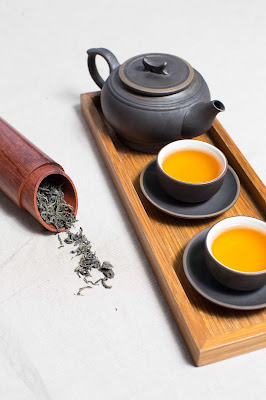 Tea, made from the leaves of the Camellia sinensis plant, has a long history of use for health purposes. Tea originated thousands of years ago in ancient China as medicine used to treat various illnesses; over hundreds of years, tea gradually shifted first towards being viewed as a general tonic for good health, and then developed into being viewed a beverage as it is today.

Varieties of Tea:
Tea comes in many varieties, ranging from the least-processed white tea, to unoxidized but generally steamed or pan-fired green teas, through intermediate oolongs, fully-oxidized black teas, and aged pu-erhs.

Each of these broad types comes in dozens if not hundreds of varieties, and within each variety, individual teas vary greatly from one estate, farm, or factory to another, and even from one year to the next (as they are influenced by variable factors such as weather).

Different teas can have remarkably different flavors, aromas, and other characteristics. Not surprisingly, they have widely variable health benefits as well.
Are some varieties of tea healthier than others?
Green tea is widely touted as having a myriad of health benefits. Oolong tea (often spelled wu-long in this context) is often pushed as a dieting or weight-loss drink. Pu-erh tea is promoted as lowering cholesterol.

White tea is often presented as having more antioxidants than other teas. Most of the sources making these claims are companies promoting their own products; they do not cite scientific studies backing their claims. While some of these claims about health effects are true, others can be misleading or even outright wrong.

Which of these claims are true?

Some of the most widespread and most misleading statements about tea are generalizations about one broad class (such as green, black, or white) being universally better than others are misleading. In reality, the health benefits vary much more among individual teas than they do among broad categories. Science firmly backs this perspective.

A 2005 article in the Journal of Food Science presented a study of the distribution of Catechins and other chemicals in 77 different teas. Catechins are the most well-known antioxidants in tea, and are well-established to have positive effects on health. Most of the teas studied were ones widely available in supermarkets in the U.S. The published study can be found here:

http://ddr.nal.usda.gov/handle/10113/1807
The results are astounding: among black teas, the tea with the most Catechins had over 12 times as much as the one with the least. Among green teas and others (including white and oolong) the factor was even larger.

While green teas tended to have more Catechins than black teas, a number of black teas ranked higher than many of the green teas. Also, black tea contains theaflavins, antioxidants not found in green tea except in tiny traces.

If we accept these measures as a good indicator of health value, this study firmly establishes that the health effects of tea must be addressed on the level of individual teas, not broad categories.

So how do we maximize our health benefits when drinking tea?

This seems to present a problem. If we are seeking health benefits such as antioxidants, and these benefits vary widely from one tea to the next, how are we to choose what to drink? An obvious long-term solution is for scientists to study and publish the antioxidant content of more teas, and also to continue researching and questioning the validity of various claims of health benefits.

But until this is done, the best we can do is to explore drinking a wide variety of different teas...and perhaps more importantly, to be skeptical of bold claims and sweeping generalizations that are made without reference to rigorous scientific research.